The cost and number of person-hours spent developing Word is mind-boggling. It”s well over a billion dollars, and there are well over ten thousand person-years of effort in it. Making a new one just for the Mac would have been so expensive that a copy of Word would cost several thousand dollars. You might buy two at that price, but the rest of us couldn”t afford it!

Because it is the same software, and Microsoft has a policy of bringing the two versions closer together, the differences will become less over time. Essentially, each version on the PC is matched a year later by a version on the Mac (Microsoft is trying to reduce that gap, recently the Mac Business Unit became part of the main Office Business Unit that makes Office for every platform).

Mac Office MVP Jim Gordon writes: “The Microsoft Office file format Open XML (OOXML) is for Word, Excel and PowerPoint files and used on both the Mac and the PC. The file format was accepted by an international standards body. Office 2010 for Windows with service pack 2 or later and Office 2011 for Mac comply strictly with the standard. Office 2008 for Mac and 2007 and 2010 for Windows prior to service pack 2 comply about 98% of the way to the standard (there”s a very minor exception in Excel).

“Microsoft also ships a set of fonts with the same names on both Microsoft Office for Mac and PC. The fonts distributed with Mac Office have been very carefully adjusted (“hinted”) so documents on the Mac will look and orint the same way as documents using the PC versions of those fonts on the PC. The differences are tiny, but they account for the differences in the way the Mac places pixels on the screen.

“As for having documents be identical when moving from one computer to another there are factors you must consider. This is true PC to PC, PC to Mac, Mac to Mac, and Mac to PC. Microsoft Word is a word processor that has text that flows, unlike a PDF or page layout program. Any difference in font or printer driver from one machine to another has the potential to affect spacing, breaks, window & orphans, paragraphs, etc. To repeat – these changes have nothing to do with Mac to PC, rather they are caused by computer to computer differences.

“Your documents should look the same on the Mac as long as ALL of these conditions are met:

Having said all this:

On each platform, Word adopts the default appearance of the Operating System. There is almost nothing that you see on the screen that is drawn by Word: on the Mac, the display is created by Mac OS; on the PC, by Windows. It saves money and it saves vast amounts of disk space and processor power.

The only difference you are likely to notice is that if you are in OS X, the window controls are on the opposite side to Windows. 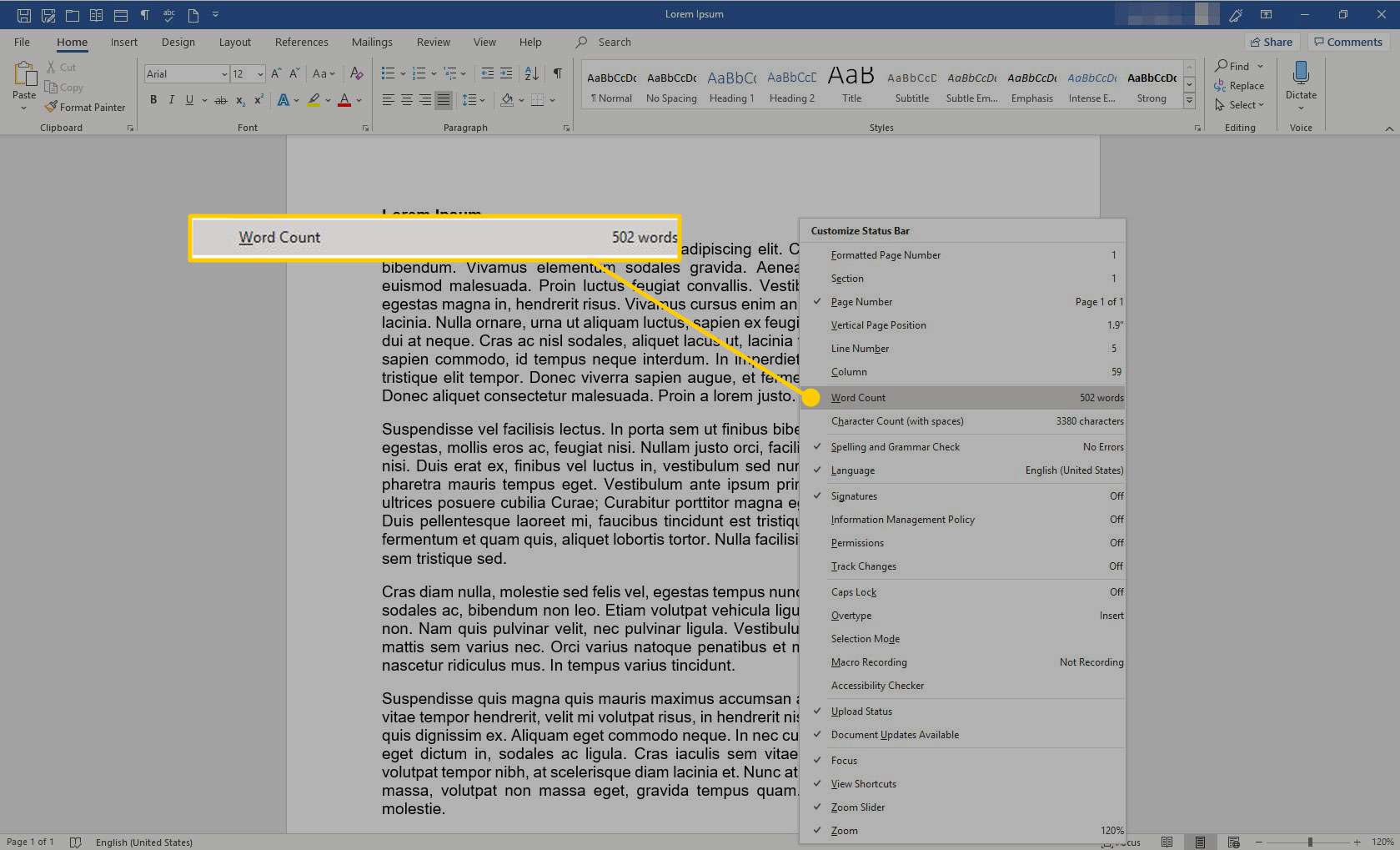 On a Windows keyboard, the Control key is always labeled Ctrl. On a Mac keyboard, expect to find the ⌘ or ? symbol on the Command key. (These characters will not display on the PC; they should look like this:.) This paragraph is a classic example of the cross-platform font difficulties you will experience. There is no default font common to the PC and the Mac that contains both of those characters (in case you are interested, that”s “Lucida Grande”, the most wide-ranging of the Mac OS X Unicode fonts).

Word is very right-click-centric. If you do not have a two-button mouse, you will find it is a very worthwhile investment if you are going to spend much time in Word.

Word also responds to the scroll-wheel if you have one. (Not all windows; for example preferences and options dialogs do not..). Mouse scroll wheel support in Word pre-X depends totally on the mouse drivers. Microsoft drivers for the Microsoft Mouse generally work (and will often drive other companies” mice!).

In Windows, the keyboard shortcuts are listed in the Help, in a topic surprisingly enough called “keyword shortcuts”. On the Mac, only some of the keystrokes are listed, in various topics such as “About using shortcut keys” and “Select text and graphics”. To find the list on either platform, use Search from the Microsoft Office Help to look for the word “keyboard”.

You can look at the Key Assignments by using Tools>Customize>Keyboard on either platform. If you select a command, and it has a key assignment, the Customize dialog will tell you what it is. This is a better place to look than the Help, because users can (and should) change their keystrokes to suit themselves on either platform. The Customize dialog also includes a handy Reset button if you decide you do not like the keystrokes you inherited from the previous user on that computer.

Finally, each version of Word enables you to print a list of the currently-assigned keystrokes so you can stick them on the wall. To print them on the Mac:

You do it exactly the same way in Windows, or see here for a more extensive pre-built list.

With OS X, Apple changed some of the keystrokes reserved for the operating system and added some new ones. On each version of Mac OS, Word follows system convention.

Some Mac keyboards do not have a Forward Delete key. Word needs one: there is a difference in Word between Forward Delete and Back Delete. You will strike it most often in tables: in a Table, Delete becomes “Clear” which removes the cell contents without removing the cells. Use Cut to delete the cells themselves. Back Delete will remove text within a cell but has no effect if more than one cell is selected. If you are on a Mac laptop, the Forward Delete key is probably Function + Delete.

The Mac has an Option Key, Windows does not have an equivalent. Generally what you expect from the Option key will be on the Control Key in Windows.

One thing that will catch you out all the time is that on the Mac, Word adopts the Mac convention of having a Preferences command. In OS X it”s on the Application (Word) menu, in OS 9 it”s on the Edit menu, again, following the OS convention. On the PC, this is Tools>Options on the Tools menu. It”s the same thing, the tabs are exactly the same inside.

Word on the Mac still has a Work menu you can put on your menu bar; this has been replaced by the Task Pane (which is nowhere near as convenient) in later versions of PC Word.

Mac Word also has a Font menu which the PC lacks.

In order to display a document in WYSIWYG mode, Word needs to know a lot about the capabilities of the printer the document will eventually be sent to.

In Windows this is very simple: Word reads all the information it needs from the printer driver for the printer set as the Windows default. On the Mac, it attempts to do the same thing, but the mechanism is vastly more complex. Look here for more detail. 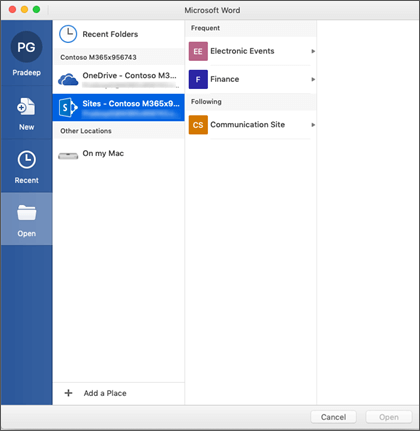 Some Features Didn”t Make it

Making software is a depressingly manual activity. Every line of code has to be planned, typed, and checked. There are more than 30 million of them in Microsoft Office. There simply was not enough time and money to bring all the features of PC Word across to the Mac. And some of them we wouldn”t want, anyway! Most of the omissions are of interest only to solution developers: 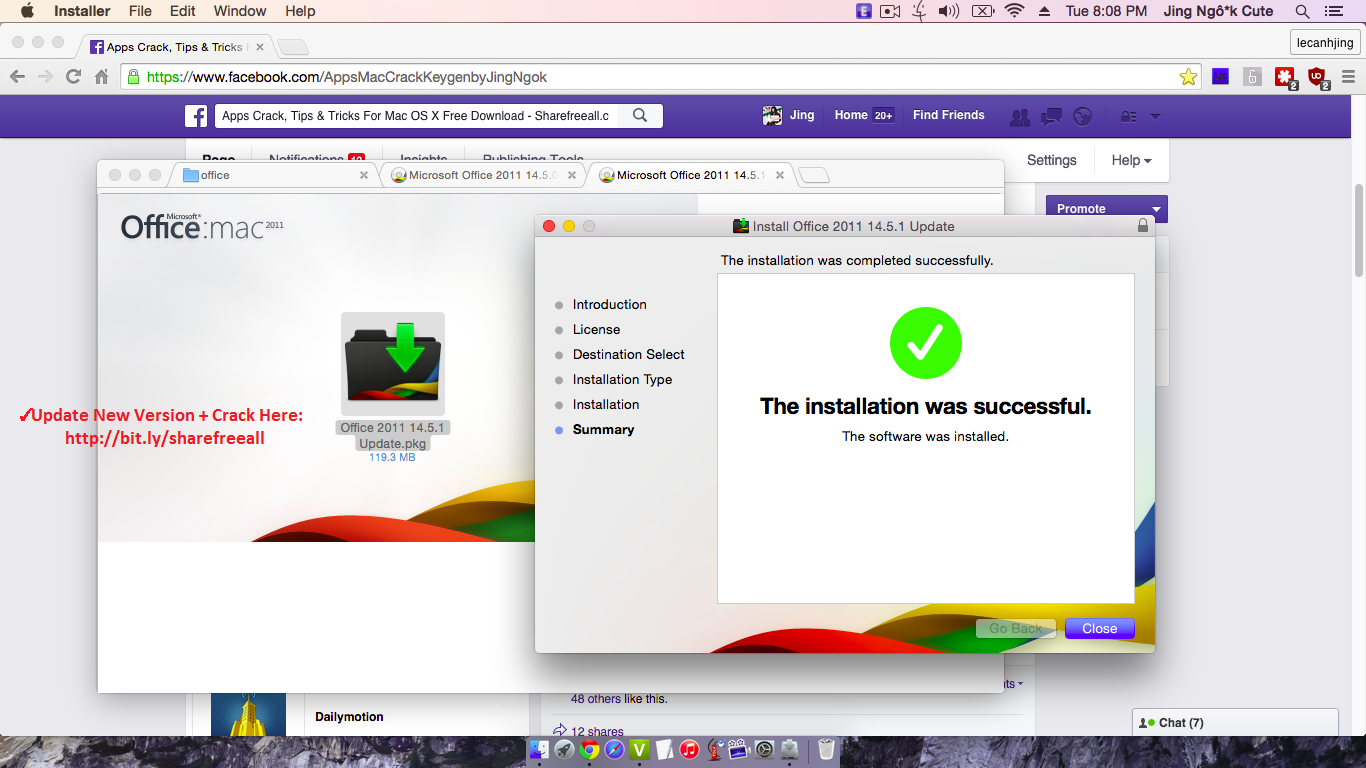 Fonts Can be a Problem

On the PC, you can use characters with impunity: if the PC does not have the font, it will find the closest font that contains the character. On the Mac, in Word 2004 and above, you can use the exact same range of characters because Word 2004 is running in Unicode; however, because you cannot embed the font in the document, you need to make sure that each character that you use exists in one or more of the Unicode fonts your recipient has. If in doubt, for PC compatibility, use only the fonts that Microsoft supplies.

Microsoft includes a pack of fonts with Mac Office that have been very carefully hinted to display and print the same on the Mac as the same-named fonts do on the PC. Although the Mac can happily use PC fonts, the rendering of those may be subtly different, particularly on the high-res Mac displays.

Jim Gordon reports that he has no problems at all with the following list of fonts:

Jim says “Office for Mac has a very nice feature to make font compatibility a cinch. When you choose a font using the Home tab of the Ribbon, the first item in the list is Font Collections. The easy way to ensure compatibility is to choose fonts from the Windows Office Compatible font collection submenu.

“If you have company specific fonts they must be installed onto each Mac in order for Mac Word to use them. There is no work-around to the restrictions John mentioned. Fonts embedded by Windows Word are ignored.

“I haven”t had problems with cross-platform differences with our HP, Epson, and Lanier printer drivers, but we do test for differences before purchasing so that we don”t run into such problems.

While there”s no interface on Mac Word to make Font Themes and Color Themes (you can do it in PowerPoint, or with VBA), Themes made on PCs will work on a Mac.

VBA a Level Behind

The VBA level in Mac Word is markedly less capable than in PC Word: around the level of Word 2003 but with missing bits.

ActiveX is not supported on the Mac at all. If you create userforms, use only the controls provided in the Forms Toolbar on the Mac, anything else you bring from the PC will generate an error when the user opens the document.

Digital Signatures are not supported on the Mac, and neither is code signing. You will not be able to open a signed project in Mac Word. If the signature prevents you from changing a macro, the code will be execute-only on the Mac.

AppleScript is not available on the PC. VBA is very powerful: investigate scripting your application from AppleScript with VBA, using the “Do Visual Basic” command.

The VBA Integrated Development Environment is severely cut back on the Mac. If you plan to develop much VBA, invest in a copy of Virtual PC: the productivity you gain is enormous. Hint: Use Windows 7 and NTFS disk format.